Ludmilla Siim. The Glimmer of Being

From 23 February, Tartu Art Museum will host Ludmilla Siim’s extensive and colourful retrospective exhibition The Glimmer of Being. The exhibition for the first time brings together Siim’s paintings that are part of the canon of Estonian art and the works she made in over forty years after emigrating to Finland.

For Tartmus, organising this retrospective was symbolic for two reasons. Firstly, the artist lived and studied in Tartu until she graduated in 1958 from the Tartu School of Visual Arts. And secondly, the last exhibition in which Ludmilla Siim participated before she left Estonia opened on 17 December 1976 in the Tartu Art Museum.

Siim was a well-known and recognised artist in Estonia. The decision to leave the Soviet Union in 1977 removed her for a long time from Estonian art history and her works were banned by the authorities. After the Soviet Union collapsed in 1991 Siim could once again participate in exhibitions in Estonia.

The retrospective exhibition The Glimmer of Being takes place on the first two floors of the Tartu Art Museum’s leaning building and offers an overview of the artist’s oeuvre from the end of the 1960s, when Siim participated for the first time in exhibitions, to her newest works.

In the catalogue, the Estonian art historians Liisa Kaljula and Jaak Kangilaski offer new information about Siim’s works. The former focusses on stereo paintings in Siim’s oeuvre from the 1970s and the latter describes the artist as a contemporary and a friend. Siim’s role in the art life of Finland is explored by artist Teemu Mäki. The book additionally contains an interview with the artist from summer 2021 and a curatorial essay surveying the artist’s colourful life. Of course, the catalog does not lack an extensive selection of reproductions and historical photographs. The book is designed by Madis Katz, translated by Peeter Talvistu and edited by Anti Saar and Richard Adang.

Ludmilla Siim. The Glimmer of Being exhibition booklet 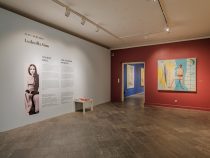 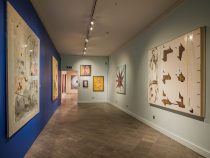 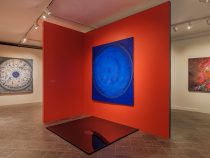 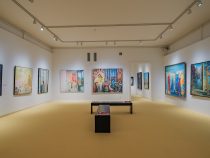 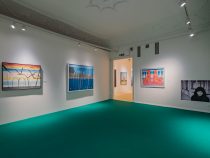 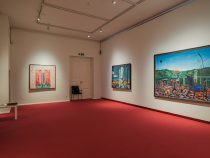