Estonian Energies. The Power of Practice

The artist collective Estonian Energies –  Jüri Ojaver, Paul Rodgers, Jaan Toomik and Jaan Paavle – was mainly brought together by friendship. They first exhibited together more than twenty years ago, in 1999, in the Rotermann Salt Storage in Tallinn. Since then, eight exhibitions abroad have taken place but this is only their second collaboration in Estonia. The masterful authors acknowledge the self-irony of the present title, “The Power of Practice”, which suggests that their art has transformed over time from an existential compulsion to a routine choice. Although a masculine roughness runs through their oeuvre, and it can certainly be found in the black humour often included in their works, the world view of the four artists is never spiteful. Instead, the common denominator of Estonian Energies is sympathy.

Jüri Ojaver (1955) entered like a comet into the Estonian art life at the beginning of the 1990s, earning the grand prix of the first two annual exhibitions of the Soros Centre for Contemporary Arts. In 1999, he represented Estonia at the Venice Biennale, together with Ando Keskküla and Peeter Pere.Ojaver is mainly known for his conceptual sculptures but video works and performances also play an important role in his oeuvre. The common thread that passes through most of his works is slogan-like messages, which can be as short as: “Cuckoo!”

Jaan Toomik (1961) is one of the most internationally well known Estonian artists. He was one of the first to represent Estonia at such biennials as São Paulo and Venice, and his works can be found in permanent exhibitions of museums abroad.He was one of the first significant video artists of Estonia, although his pieces were often documentations of his performances. Another common aspect in his oeuvre is painting. While Ojaveer’s works are characterised by irony, Rodgers’ works verge on poetry and Paavle’s works reveal the esoteric sunshine boy, Toomik’ works capture viewers with the irrefutability of fate from which even art can offer no respite.

Paul Rodgers (1953) is an artist from Great Britain who came to Estonia immediately after the country regained its independence in 1992 with the aim of establishing contacts with artists from Eastern Europe who were of great interest to the West by inviting them to artistic residencies in Norwich. The first artist he met was Jüri Ojaver. After first developing an artistic exchange, Rodgers soon moved permanently to Estonia. In 2000, he, Jaan Toomik and Teet Veispak founded the legendary performance festival Kananahk, which brought many significant artists to Estonia, where the thirst for foreign contacts was rapidly growing.Despite using ready-made objects and videos to create his morbid compositions, the installations of Rodgers seem more abstract than the works of his companions.

Jaan Paavle (1940–2010) is the black sheep of the collective. Having graduated in 1980 as a ceramicist from the Estonian State Art Institute, he is better known as a poet than as a visual artist. It is clear that he would have been even more of an outsider if Jaan Toomik hadn’t included him in his performances. However, Toomik has talked about Paavle’s influence on his finding his way to film making.Paavle published four collections of poems and one collection of texts. His artistic legacy, which was influenced by Buddhism and his esoteric world view, was collected and stored after his death by his friends and is quite considerable. Most of it is from the last decade of his life, when he was painting at a feverish pace. 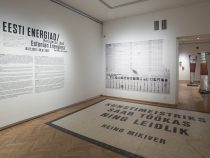 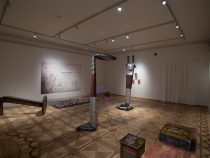 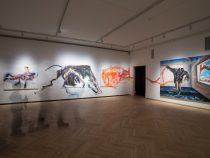 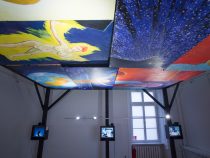 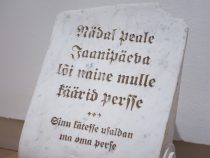